At our fall retreat in September at Chautauqua, ECW got a head start on “working together to deepen relationships” as Bishop Sean said in his presentation at the joint Convention with the Diocese of Western New York. The ECW Board sent invitations to the retreat to New York’s southern tier churches.  To our delight, eight women, lay and clergy,  responded and attended our event.

Barbara Sheakey, assisted by Sharon Kestler, presented a program about women’s role in American Indian spirituality and gave us a first

person view of Native American customs and beliefs from Alaska, the Midwest, Canada and Mexico, illustrated by many artifacts that turned the living room of the Episcopal Cottage into a virtual museum.  Luncheon was also inspired by Native American food.  At the end of the day, Barbara ushered us through making a Hopi Indian “prayer stick.”

One woman from the Diocese of Western New York asked if she could sign up ahead for next year’s retreat.  That was what we were hoping  for – a renewed enthusiasm in learning, loving and living with God, which is what our guests brought to our retreat.

Diane Pyle is secretary of the Episcopal Church Women of DioNWPA.

The Diocese of Northwestern Pennsylvania’s Episcopal Church Women will host their annual retreat at the Chautauqua Institution Episcopal Cottage on September 23rd beginning at 8:30 am.  The retreat will include a viewing of the movie “The Shack” followed by discussion led by the Rev. Bonnie Skellen.

All have been impacted and hurt by the disease, dysfunction, and destruction of this broken world. All of us are in need of healing and restoration. Every intentional movement toward wholeness is connected to relationship, to spiritual friendship, and to the discovery of the beauty God has created within you, within your humanity, and within your community. Come and explore the triune God, not in some cathedral or stronghold of your own making, but in “the shack” of your pain. It is there that you will be confronted and comforted with the real relational truth of who God is and who you are.

Overnight accommodations for Friday/Saturday are available at the cottage on a first come, first serve basis. Registration is $30 for Friday and Saturday, $20 for Saturday only, and is due by September 18th.  To register, download the Registration Form and mail to Joyce Gieza at the address listed.

The Diocese of Northwestern Pennsylvania’s Episcopal Church Women will be hosting their annual retreat at the Chautauqua Institution on September 17th.  The retreat will feature speaker Sandi Matts, author of Listen to the Whisper – Freedom in the Midst of the Storm.

Sandi was born and raised in Erie, PA, and is part of the core team and a speaker at the “Discover the Woman Within Series,” and the “Life in the Spirit Series”.  She also serves on the healing ministry at her church. From her personal page: “My mission is to share love, life and God’s light with the world.  To inspire others to believe in their individual giftedness and to recognize blessings in the midst of life’s storms.”

All are welcome!  Registration is $20 for Saturday and is due by September 10th. Registration includes a continental breakfast and lunch.

If you have questions or wish to make a reservation contact dianepyle@windstream.net  or maryblaineprince@atlanticbb.net.

“One Church” was the message presented by the Reverend Melinda Hall at the ECW Annual Meeting in Youngsville, May 7.  Members of the diocesan Dominican Republic team each spoke of their mission to the church in Santiago De Los Caballeros and the children as they assisted in the Vacation Bible School.  This coming year will be the second time the team travels there.  Recently,  Melinda requested support from our diocesan churches by way of crafts and financial support for “treats” for the children.  On hand at the ECW Meeting,  Gloria McIsaac, President of the ladies guild of Emmanuel Church, Emporium was able to present two crafts to the team.  Supplies for bead bracelets and flower pens.  Melinda pointed out that the ten member team was a collaborative effort from our diocese as no two people were from the same church.  Missy Greene also shared her role working with The Vine, a youth ministry in the Erie area.  The Episcopal Church Women offer their prayers and support for these two outstanding efforts.

There are two openings on the Episcopal Church Women’s Diocesan Board.   We have monthly meetings from March to October each year.   We usually meet at the church in Youngsville (St. Francis of Assisi) on Tuesdays and we plan programs for our annual meeting and the retreat at Chautauqua. We also support other projects such as the labyrinth ministry and liaison with province Three and National Church Women.

We welcome anyone with our open arms and a seat at our table.

Learn more about us by clicking here.

The Diocese of Northwestern Pennsylvania’s Episcopal Church Women will be hosting their annual retreat at Chautauqua Institution on September 12th from 8:30 a.m. to 4:00 p.m.  The retreat will be led by The Reverand Canon Al Johnson (Canon for Congregational Vitality and Innovation with the Diocese).  Canon Johnson will speak about “Jesus and the Local Church.”

Stories are at the heart of all we do each and every day and in all our churches each and every Sunday.  During this retreat participants will learn the stories of each other and of Jesus.  They will explore the unique calling of the local parish and then proceed to tell the story of each local parish.  They will explore trends related to the local church in our nation and then look at similar concerns in our local communities. They will discuss what recent statistics about religious institutional life say about our local communities, as well as the struggles and triumphs of the local church.  Finally participants will explore a local church that is living and free by discussing  generativity, fear, resurrection, and abundance.

All are welcome!  Registration is $20 for Saturday and is due by August 28th. Friday, overnight accommodations are available at the Episcopal cottage on a first come first serve basis (Friday and Saturday registration is $30).  Contact Donna Wheeler for information and to register 814-825-5708.

The Episcopal Church Women of the Diocese of Northwestern Pennsylvania will hold their annual meeting and program on Saturday May 2, 2015 at St. Francis of Assisi Church in Youngsville, PA.  The featured speaker will be Dorothy Arthur, Province III representative from Parkton, Maryland.  She will discuss planning and programming for the upcoming ECW Triennial in Salt Lake City.  Registration is at 9:00 am and includes a continental breakfast.  Reservations are $10.  Contact Donna Wheeler (814-825-5708) or Enid Bishop (814-455-9601) by April 29. 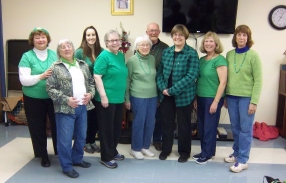 The program includes Learn and Sing Taise with the Rev. Bruce Burkness, Lutheran Pastor of St. John’s, Emporium and Good Shepard, St. Mary’s, PA.  A Taise Service will follow accompanied by instrumentalists, the Mountain Melodies of Emporium.  The Eucharist will be celebrated by Mother Rebecca Lash.

In other ECW News

Frances Rhodes was born in Yorkshire, England. Educated as a journalist, she later became a war bride and moved to the U.S. after WWII. In Youngsville, Pennsylvania, she became very active in community services and wrote for various newspapers.

She was one of the founding members of St. Francis of Assisi Episcopal Church where she served on the Vestry and many other ministries. Frances served the Diocese of Northwestern Pennsylvania on Diocesan Council, Commission on Ministry, Standing Committee, ECW Diocesan Board and edited Forward Newsletter for many years. Frances died Oct. 21, 2013 and it is with admiration and gratitude for her life that we present her posthumously as our Distinguished Woman. Her daughter, Lynette William will receive the award in her behalf, escorted by ECW Board delegates, Nancy Scott and Monica Irwin.

My Tweets
Join our email list
For Email Newsletters you can trust.