“Lord, what would you have me do” is the final sentence in the motto of The Order of the Daughters of the King.  It is both a prayer and a call to serve. We, as a lay order of Episcopal women, pray daily to hear God’s call to serve our parish and our community.  The Daughters of the King in this diocese recently answered His call for prayer and service by participating in two very different activities this fall.

We answered His call to prayer at the recent joint convention of the Dioceses of Northwestern Pennsylvania and Western New York in Niagara Falls. When the 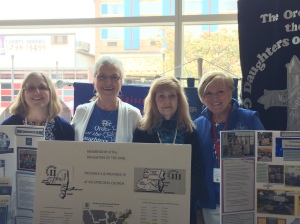 announcement of a joint convention was made, Daughters in NWPA sought to contact Daughters from WNY to plan a joint activity. Alas, we learned there were no chapters in that diocese, and so we contacted Daughters from that Province. Two Daughters from Albany joined Grace Chapter from St. John’s in Franklin and Martha Chapter from Trinity in New Castle to offer prayer for those in attendance at the convention. A prayer table with candles and prayer request cards was set up in the rear of the meeting room. Attendees were encouraged to use the cards and place their prayer requests in a container on the table. We were astounded by the number of prayer requests which we instantly relayed to our members at home.  Prayer was offered in real time and we continued to pray for the petitions for another 30 days.  We also set up a table with information about the Order in the break area and we were delighted with the interest shown by the convention attendees. Plans are being made to visit a number of churches to give informational talks.

Our call to serve was answered by participating in a joint project with WELCA (Women of the Evangelical Church of America): the Lily Project. The Lily Project is a collaborative effort involving

women from Good Hope Lutheran Church in Oil City and Grace Chapter of the Daughters of the King at St. John’s, Franklin. The purpose of the project is to assist women who have been victims of rape or sexual assault. These women often come to the ER with damaged clothing or must surrender their clothing as evidence of their assault.  We know this can be dehumanizing and adds to the trauma of the assault, so the Lily Project provides them with fresh clothing and a prayer for God’s comfort and peace. We have collected donations of underclothing, socks, loose athletic pants and t-shirts. These items are placed in a gift bag with a pack of tissues and a prayer square. Each size from small to extra large is placed in a bin marked with the size and then delivered to five area hospitals with a promise to replace items as they are used.

If you are interested in more information about the Order of the Daughters of the King, you can go to the website doknational.org or contact Kathy Paulo at St. John’s, Franklin.

Kathy Paulo is a member of St. John’s, Franklin.