The current state of the world is volatile. We all know this to be true. The terrorism, gun violence, increase in gangs, and job losses can be debilitating. But we are called as followers of Jesus to speak life – resurrection hope – into those dark debilitating places in our world. But, how do we even begin to know where to start?

Fr. Don Baxter, Gary Loncki (one of St. Mark’s delegates), and myself asked that very question of ourselves on the second day of diocesan convention. The lead story in the Erie Times News was about the massive layoffs announced by General Electric for their Erie plant. We wondered how we could respond. There was no way we could create new jobs for these people and no way that we could financially assist all of the people who would be impacted. What we knew is that we are people of prayer as followers of Jesus, and that we have a beautiful tradition of common prayer that perhaps we could offer to the community in a time of great uncertainty and grief.

In that moment of our response, God went to work. We began by crafting an evening prayer service with healing for the jobless and job-displaced people of our region. It was our hope to have a local leader offer a reflection at this event, but we weren’t having much luck finding that leader.

Then a providential opportunity presented itself where Fr. Don found himself at an event with Sister Joan Chittister, a world-renowned author on religion. In a step of faith, Fr. Don approached Sister Joan with the invitation to speak at the service. By the grace of God, Sister Joan was available and excited to offer the meditation. Fr. Don’s willingness to take a chance, Sister Joan’s support, Gary Loncki’s public relations experience, and guidance of the Holy Spirit came together to create an opportunity for healing far surpassing our wildest imagination. All of a sudden we had news coverage from all of the news channels and the newspaper. Our message, the message of the Resurrection, was being proclaimed.

On November 29, St. Mark’s hosted 60 guests at that service from all walks of life. Sister Joan focused her meditation on the grief and sadness that we are all familiar with and spoke deeply to the resurrection hope that we all have in our Savior Jesus Christ. Over 40 people came forward for healing for themselves or on behalf of another. The presence of the healing power of the Spirit was palpable as Fr. Don, Sister Joan, and Judge Nygaard laid hands on those 40 people asking God to come into their lives in new and powerful ways. That night was one of those moments that we desperately yearn for as ministers in the church, and it was an honor to bear witness to such a moment in the life of the church. 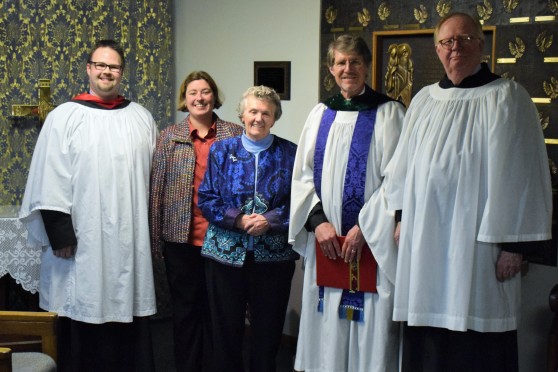